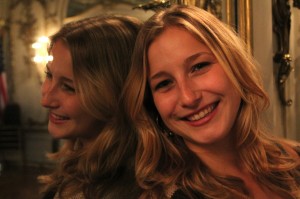 As a part of her honors requirement for the Art Therapy: Media and Application course at Arcadia University this semester, I invited Samantha Baggott to write a guest post on her research about overcoming communal rejection through art, which includes an interview with art therapist, Gussie Klorer and her recent project, Ribbons of HOPE in Ferguson, Missouri.

An aspiring Art Therapist, Samantha Baggott is currently in her final year at Arcadia University working towards a Bachelors degree in Pre-Art Therapy with Honors. Following graduation in the spring of 2015, Samantha plans to pursue a Masters degree in Art Therapy and Counseling, beginning the journey to becoming registered and board certified. Her hopes are set on owning a private practice upon receiving her credentials to offer herself as a resource to others. Having completed an internship with a local social service agency in Summer 2014, Samantha has developed a new interest in the field of respite care for children with special needs, as well as family based therapy interventions with youth at risk for out of home placement in a psychiatric care facility. Her interests in those suffering with post traumatic stress disorder have grown greatly throughout her education and she would like to further explore this population, perhaps directing her initiative to assist these individuals. A personal and professional goal of Samantha’s is to become an active leader in the field of art therapy by achieving the capability to make a difference in life through creative expression and the therapeutic process.

Within the last twenty years the United States has experienced several major tragedies varying from natural disasters to planned acts of terror. The communities affected, and the witnessing individuals throughout the country, have endured considerable stress following these events. Within the United States, tragedy and loss have become highly publicized and reported matters. These tragedies strike communities without warning and leave survivors to cope with ensuing stress and trauma. While nothing can reverse the impact of the traumatic event, the use of artwork with communities and individuals affected by tragedy can help to lessen the effects of trauma, provide an expressive outlet for survivors to share their emotions and reactions, and make available a supportive environment open to all people to find condolence.

Although Americans have been shown to come together in support of survivors directly affected, there is also an undocumented effect of tragedy that occurs known as communal rejection. Communal rejection is a phenomenon in which support may be denied to groups of people directly affected by natural disasters or public health emergencies due to the refusal of others to recognize the severity of the effects of the disaster on the affected population (Hodge, Orenstein, Weidenaar, Meza, Van Buren, Wearne & Penunuri, 2013). This communal rejection may include acts of discrimination and refusal to address the needs of those affected by the incident as well as physical bans placed on the ability of affected people to relocate. This rejection leaves survivors without the physical and social resources needed to work toward recovery, a byproduct of such a traumatic event includes Acute Stress Disorder (ASD) and Post Traumatic Stress Disorder (PTSD) (Hussain, 2010).

Survivors who develop Post Traumatic Stress Disorder, a long term experience of anxiety or dissociation following a stressor, are most at risk are those who have been physically immobilized while trying to escape, those with first hand experience of the sounds, smells, and images of the event, who had witnessed death or dismemberment of another, and those whose lives have been altered due to the injury or death of a loved one (Hussain, 2010; Van der Kolk, 2002). According to Van der Kolk (2002), “Staying focused on problem solving, on doing something, however small, about the situation – rather than concentrating on one’s distress – reduces the chances of developing post-traumatic stress disorder” (p. 35). Becoming involved in a community art movement may be the resource survivors of tragedy are in need of. Not only will survivors be made aware of the suffering of others alongside them, they will be welcomed into a positive social context that will reestablish the feeling of safety needed for a successful recovery. A goal of positivity and growth following a tragic situation can be established though community art making and the response received from a community art project will “shape the way the victim comes to perceive the safety of the world and the benevolence or malevolence of others,” thus supporting a move towards recovery and overcoming possible communal rejection (Van der Kolk, 2002, p. 36).

A current community art project developed in response to recent tragedy and ongoing violence is Ribbons of HOPE in Ferguson, Missouri. Two local art therapists of Ferguson, Gussie Klorer and Dana Sebastian Duncan, partnered with the Missouri Art Therapy Association, the Northern Arts Council, the Adolescent Resource Center, and the Ferguson Youth Initiative to begin this project (Missouri Art Therapy Association, 2014). Although the original idea can be credited to Dana Sebastian-Duncan, this movement and what it stands for along with its effects on the community of Ferguson are matters close to Klorer’s heart and of great importance (personal communication, October 4, 2014). Ribbons of HOPE is a continually developing physical display of weather resistant ribbons on which participants are asked to write or draw their vision of hope for the future (MATA, 2014). Upon beginning this project, the goal was to get a positive message out, both through the local community and spreading further into the nation, expressing that Ferguson is not a place of constant violence and corruption, but rather a community that is trying to thrive in the face of adversity. “The media has been so negative about Ferguson, and a lot of things are being projected onto Ferguson that I don’t believe belong to Ferguson… We really wanted to do something to turn a more positive note to this,” Klorer explained when asked about the purpose and goals within this project (personal communication, October 4, 2014). She feels that the community is attempting to move past the negativity and violence that have appeared recently, but are not receiving the proper support. “I think it’s really interesting that the local news has totally ignored it,” she states, providing an example of communal rejection within the greater Saint Louis area. She feels that newspapers are choosing to ignore the good being done within this community in favor of focusing on the controversial and negative, spreading inflated and often played out stories they feel to be worthy of headlines. Klorer and the accompanying organizations are currently working to combat this negativity through Ribbons of HOPE, not only to provide support for those directly effected affected within the community, but also to spread positive news to nationwide followers. “We wanted something to be very visible and to focus on the future, and focus on hopes and wishes and positive things for Ferguson rather than dwelling on all of this negative stuff that is happening,” (personal communication, October 4, 2014). Klorer notes the great interest and involvement on the local level that has come from the formation of this project inspired movement. As volunteers using their professional experience and knowledge to help the community, being present in the community and offering a regular but informal headquarters for creation of ribbons during the weekly farmer’s market has allowed this group to reach the local population and experience their immediate reactions to the process. Klorer shares that many people approach her while hanging ribbons, express interest and enthusiasm, and choose to contribute to the movement. She observes that, “people are contributing on their own and are moved by the project,” however “it is likely ignored by some people too, I mean I think people drive by it and don’t know what it is.” This is a rather new project, originating in September 2014, and Klorer expresses a mixture of discouragement and enthusiasm; she feels as though this project is not having the impact she hoped for in aiding Ferguson in the move out of communal rejection, but does acknowledges its potential to be very influential, referring to growing national involvement and sharing the correspondence she has exchanged with other art therapists that plan to contribute to the movement. Within less than a month, the group has received over 1,500 ribbons containing various hopes for the future and suggestions for positivity from a variety of locations. Examples include “you are beautiful no matter what people say,” “it’s okay to be mad, just calm down and take a deep breath,” and “love who you are, you are equal” (personal communication, October 4, 2014). The freedom of expression displayed in the messages on each ribbon, as well as their integration into two major locations has greatly changed the visual appearance of Ferguson, drawing more attention to this movement. “I don’t know if other people really understand what is happening here, but they certainly are resonating with us needing support and needing help,” Klorer states, expressing her overall pleasure in the positive coming together of the community of Ferguson and the rest of the nation in response to the negative tragedy and ongoing struggles. This project demonstrates the impact collective art making has on developing unity within a community and overcoming stigmatization and rejection, while enforcing healthy outlets to stabilize psychological reactions to stressors. 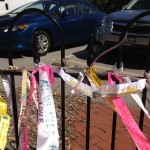 The unity and reactions displayed both within communities and throughout the nation in response to tragedies in the United States, as well as successful coping and recovery of survivors can be greatly credited to the simple act of bringing people together through creative and artistic means. “Being part of a large group of people who were vulnerably linked by a national tragedy created a forum where many unprocessed feelings were confronted simply by witnessing the symbolic imagery of others,” (DiSunno et al., 2011, p. 50). Regardless of the type, scale, or severity of tragedy, groups creating responsive and therapeutic art will thrive in a similar manner. Common imagery, themes, responses, and group dynamics may arise, promoting acknowledgment and discussion of emotions and working towards the elimination of communal rejection and the development of a supportive community. Donations of ribbons for Ribbons of HOPE are now being accepted. Materials needed are weather resistant ribbons 14-18” long and permanent or paint markers. On a ribbon, write and/or draw your vision of hope towards the future in a positive, creative, productive, prayerful and/or wishful way (MATA, 2014).

Contributions for Ribbons of HOPE may be mailed to:

Gonzalez-Dolginko, B. (2002). In the shadows of terror: A community neighboring the World Trade Center disaster uses art therapy to process trauma. Art Therapy, 19(3), 120-122.

© 2014, All rights reserved, The Center for Psyche & the Arts, LLC; written by Samantha Baggott.