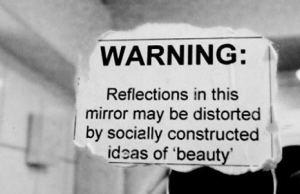 While biological, genetic, and psychological factors contribute to the etiology of eating disorders, the influence of cultural beliefs and attitudes has long been appreciated as a significant factor to the continuum of disordered eating behaviors. Cultural beliefs and attitudes are meant to assist in societal structure and relationships within an identifiable group of people, and are passed down to future generations through messages about ideals and values; they may be seen in food rituals, as well as traditions, gender roles, body size, and beauty, as well as personal, spiritual, and ascetic values. They often are carried via images such as views of family life, holidays, illustrations of religious scenes, imagery of myths and fables, and popular culture as seen in art, on television, in movie theaters, and, more insidiously, through advertising campaigns. With the expeditious development of a global society and rapid social change, exposure to different cultures and beliefs brings a wake of potential clashes. These cultural fissures may create a disavowal of social customs and beliefs that, in many regards, are considered the glue that holds communities and societies together. The resulting loss of stability in a cultural foundation, a loss of purpose, a loss of meaning, and a loss of personal value that leads in turn to a heightened need for control may contribute to the emergence of eating disorder behaviors (Gordon et al. 2012; Katsounari 2009; Soh et al. 2007). Cultural instabilities and clashes are often not perceptible just as words may be understood differently, even for people of the same cultural background.

In practice, working with the nuances and complexities of language as well as cultural issues are often overlooked in treatment. Amplifying meaning and understanding through a visual and symbolic process such as art therapy may be beneficial for illuminating individual and cultural meaning with all of its subtlety. For example, creating a graphic image such as a representation of one’s family as food and placing this depiction of a meal in a setting (Earley 1999a & 1999b) can provide opportunities to explore family dynamics, food preferences, as well as dialog regarding cultural beliefs as they pertain to food, family, and society. As an art therapist, I have assisted clients in utilizing their artwork to explore attitudes about food, including the messages about food imparted by family, food rituals related to personal and societal practice, as well as messages portrayed in the media which may polarize “good/bad” foods; thus the artwork provides a metaphorical canvas for understanding cultural beliefs and individual meaning.

The emergence of eating disorder symptoms and their meanings are constantly in flux as they are influenced by a plethora of factors, many of which still are not fully understood due to their complexity, symbolic meaning, and evolution. Eating disorder behaviors may be conceptualized as a “system of signs and symbols with multiple meanings” (Brumberg 2000, p.7). “Rates of these disorders appear to vary among different racial/ethnic and national groups, and they also change across time as culture evolves” (Miller and Pumariega 2001, p.93). Like the disorder itself, it is a shape-shifting expression of symbolic conflict and issues that take shape as a physical voice through the overindulgence, purging and/or restriction of food. 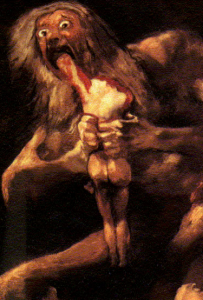 Hesse-Biber et al. (2006) suggested shifting focus from a medical/psychological view to a sociocultural/economic perspective that examines messages that perpetuate derogatory values in gender roles as well as the mind/body dichotomy. While cultural attitudes may be seen in images portrayed in media that idealize thinness and other attributes, they are not the only sources of cultural information, neither are they a singular cause of disordered eating. It is thought that “[t]he experience and exposure to the difference between two cultures, rather than a particular culture itself, is also hypothesized to contribute to the aetiology [sic] of eating and body image disturbances” (Soh et al. 2006, p. 58), and that it is a “culture-change syndrome of communities modernizing” (Miller and Pumariega 2001, p. 103). Although the above authors were referring to immigrants or cultures whose community ideals have been influenced by another society’s cultural values, it would be the cause of an assimilation clash as is so often the case with Western capitalism or consumer–corporate culture and the individual’s original culture. It may not be the industrialization itself that is problematic, but rather an attitude of parasitic proportions that accompanies it. In other words, a “parasitic” cultural attitude latches onto the host culture (invaded by the new ideals) and is consumed by it or at least radically changed, altered, or ravished by the invading culture. Often working from the inside out, this most affects those with poor esteem, unstable cultural identities, and a host of other factors including trauma, childhood ruptures, and attachment issues. The external conflict of the differing cultures and internalization of the cultural conflict provide the pregnant constellation of factors necessary for the emergence of eating disorder symptoms.

From an ecopsychology viewpoint, as cultures become fragmented and communities are severed in order to seek economic development and opportunity, meaning and relational aspects to our environment, place, and culture are lost. Rudderless and vulnerable in these modern roles, women in particular are more prone to enact the conflict symbolically through the dismembered remnants of a central core of prior value: food for sustenance and well-being. 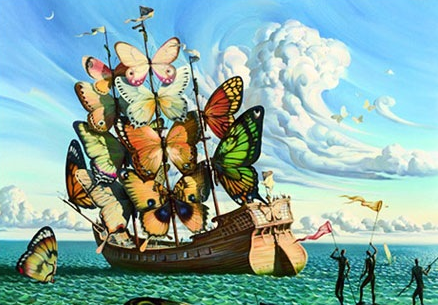 According to Woodman (1980), “This one-sided consciousness can be corrected by focusing attention on a creative approach to the body loving-understanding of its mechanism” (p. 45). Likewise, “People who are in touch with the spontaneous archetypal creative/imaginative impulse are always in a state of creative ferment” (Taylor 1992, p. 113). Art and image making carry the dichotomy of cultural bias and conflicts simultaneously. Art images create distance while also providing opportunities for relatedness. Thus, this mirroring in the image becomes the individual’s response to a cultural attitude or pattern and can be related to and engaged in a therapeutic dialog (Woodman 1980; Dallett 2008). In art therapy, the image becomes the carrier of new meaning and offer opportunities for the reintegration of splits or voids that once were filled by actions of the eating disorder.

Want to learn more, join me at

Michelle L. Dean, MA, ATR-BC, LPC, CGP is the cofounder of the Center for Psyche and the Arts, LLC. She is a board-certified art psychotherapist, licensed professional counselor, and certified group psychotherapist. In her clinical practice, she provides a warm and compassionate approach in which to explore and heal. She is also a clinical supervisor and an esteemed, nationally recognized educator and consultant. Her work has been recognized through many distinguished awards and several interviews in print, radio, and television.

END_OF_DOCUMENT_TOKEN_TO_BE_REPLACED

Though we travel the world over to find the beautiful, we must carry it with us or we find it not.