Some injuries sustained in war are not immediately fatal; instead, they linger and fester like a parasite consuming its host and infecting those closest to him.

This Memorial Day, as we remember and give thanks for the great sacrifices our military and their families have made, I would also like to remember those who have fallen not just by active duty but also from suicide. Servicemen and women who have taken their lives, leave a complicated wake for which there is no monument or recognition of valor but instead leave a ghostly vacuum in which families often grieve alone, isolated or ashamed, and its effects can last for generations. This has been shown in research related to veterans and survivors of war and trauma. I also know because my family is one such family that has experienced the intergenerational effects of suicide.

It is estimated that 22 veterans commit suicide each day according to a report from Iraq and Afghanistan Veterans of America, ABC reports. While veterans have a suicide rate 50% higher than those who did not serve in the military, the rate of suicide was, as the LA Times reported, “…slightly higher among veterans who never deployed to Afghanistan or Iraq, suggesting that the causes extend beyond the trauma of war.” The rates were highest during the first three years out of the military; this was assumed due to Post Traumatic Stress Disorder, which was not identified until after the Vietnam War but other contributing factors impact the transition to civilian life. One such example that Junger identifies in his book, Tribe: On homecoming and belonging, is the abrupt transition combat veterans find themselves missing the incredibly intimate bonds of platoon life. He says that it is the loss of closeness that comes at the end of deployment may explain the high rates of post-traumatic stress disorder suffered by military veterans today even if they have not experienced active combat. I suspec

t, it was the adjustment and loss of tribe, coupled with early childhood trauma that contributed to my uncle Dale’s death in 1972; suicide is always a constellation of complex factors.

Dale came to my grandparents’ home as a scrawny, boy dressed in a threadbare, cowboy shirt at the age of six. Taken from, or surrendered by, his biological mother as a very young child, he spent much of his early childhood in foster homes until he was placed with an elderly couple in a nearby town in western Kansas. Shortly after coming to live with them, they died, within three months of each other, right before Christmas. He was placed again, this time with my grandparents who were seeking a boy to round out their family of two girls, one who was also adopted. He arrived at my grandparent’s home only with a small parcel of belongings that included a tiny suitcase and several Christmas gifts that had been carefully wrapped by his late parents before their sudden deaths. Over the years, his petite frame grew into tall, lanky teenager who was to carry on working the family fa 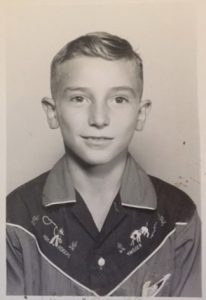 rm. But when the Vietnam War started he enlisted in the Navy.

Dale was stationed on a battleship but what happened during his tour of duty is unknown to me; he didn’t talk about it or if he did, not with anyone that wanted to discuss the “ugliness of war.” Like many men returning from Vietnam, he was met with confusion and misunderstanding. Confusion about the political and cultural unrest that accompanied it and misunderstanding about the complexity that many returning vets faced in their struggle to reintegrate into society and deal with their post-traumatic stress, a nascent psychological disorder at the time.

After months of struggling to fit in and return to farming life, Dale was unable to stay focused, find meaningful work, adequate support or happiness. So one bleak, winter day as the blanket of the north artic wind of swept this small, rural community, he drove his car 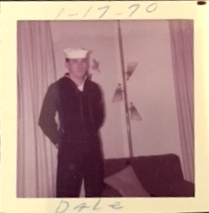 to an empty field near the country airstrip, placed a gun in his mouth, and pulled the trigger. He was 23.

As a result, my grandparents buried the only son they had known and his sisters were devastated; they could not speak about their pain due to the shame of the suicide they experienced. One of his distraught sisters was my mother. I, an infant niece, lived with the reverberations of these events. I tell this story as means of remembering my uncle Dale, and all the men and women who have so bravely served our country and for the sometimes silent, scarifies they and their families have made.

About the Author: Michelle L. Dean, MA, ATR-BC, LPC, CGP, DVATA HLM is a Board Certified Art Therapist, Licensed Professional Counselor, and Certified Group Psychotherapist in the Philadelphia area working with families who have been affected by trauma, addictions, eating disorders, and suicide. The effects of trauma do not know intergenerational boundaries, nor do they have to be loved ones’ burden to carry alone.

END_OF_DOCUMENT_TOKEN_TO_BE_REPLACED

It’s not what you go through that defines you; you can’t help that.  It’s what you do AFTER you’ve gone through it that really tests who you are.